This site has been archived as part of King's Digital Lab (KDL) archiving and sustainability process, following background analysis and consultation with research leads wherever possible.

Project content and data has been stored as a fully backed-up Virtual Machine and can be made available on request (depending on access controls agreed with the Principal Investigator) for a period of at least 2 years from the decommissioning date indicated below.

If you have an interest in this project and would like to support a future phase please contact us by filling in this form.

At its inception, KDL inherited just under 100 digital research projects and websites. Aware of the intellectual and cultural value of many of these projects, with the support of the Faculty of Arts and Humanities at King’s College London, KDL took on its responsibility to the community to steward them in a responsible manner. When the options of setting up a Service Level Agreement for further hosting and maintenance with KDL and/or undertaking migration to IT Services at King’s or other institutions were deemed infeasible or inappropriate, the archiving process was initiated.

We would like to thank research leads, the Faculty of Arts and Humanities at King’s College London, and partner institutions, for their support in this process.

For further information on KDL archiving and sustainability process see:

Mapping Migration built a Geographical Information System (GIS) and web-site focussing on the forced migration of people from 1880 to 2006 in the geographical region of Macedonia now known as the district of Kastoria, Greece.

The partners were the Refugee Studies Centre, University of Oxford, Centre for Computing in the Humanities, King's College London and The Research Centre for Macedonian History and Documentation, Thessaloniki.

The content of the web site was drawn from a collection of material consisting of historical documents, photographs (both contemporary and historical), postcards, short explanatory texts, demographic metadata in databases concerning about one hundred and twenty communities and multimedia presentations of places, historical events and cultural phenomena.

The Project focused on a section of the geography region of Macedonia, more precisely the district of Kastoria, part of the Monastir Vilayet during the Ottoman empire, named prefecture of Kastoria and Florina when incorporated within the Greek state (1913), then becoming district of Kastoria following the end of the Second World War and the Greek Civil War (1948). 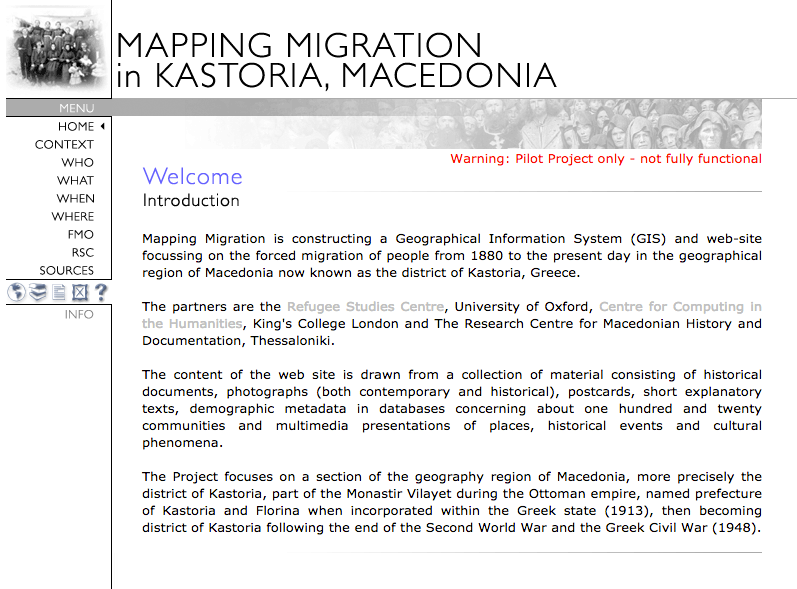